Common Core Developers - A Private Club You Are Not In

The Atlanta Journal Constitution has a story today about who makes money off the Common Core.

The main article is behind a paywall, but AJC.com does have a snippet and I found this part particularly interesting:

Achieve Inc., a Washington, D.C.-based nonprofit group that has been heavily involved in writing the standards, receives funding from corporate titans such as Microsoft, the Bill and Melinda Gates Foundation, Chevron and DuPont.

Two national consortia, the Partnership for Assessment of Readiness for College and Careers and Smarter Balanced, having gotten a combined $346 million in federal education grants to create a pair of new standardized tests tied to Common Core.

“These people all know each other,” said Michael T. Moore, a literacy professor at Georgia Southern University who has written extensively about Common Core. “It is a private club.”


Of course there is this chart that shows the connections between all the players in the Common Core tragicomedy: 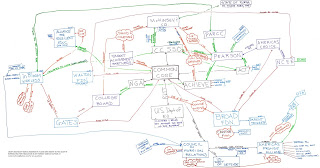 It's a private club and you are not invited.

All of the people in that flow chart, all of the entities, the "non-profits," the government agencies, the corporations, stand to profit from the Common Core - some by extending their power over others, most by cashing in on the billions in education spending.

The next time you see Bill Keller or Paul Krugman or Charles Blow or Jeb Bush or Chris Christie tell you how good these standards are for America and how there was no conspiracy to put these together and foist them on the country, remember the flow chart, remember the back rooms where the private club met to develop the Common Core standards and the assessments tied to the CC.

Can anything developed in secret by a bunch of elites who stand to profit from it by enlarging their power and enriching themselves really be good for America?

Posted by reality-based educator at 10:11 AM

Email ThisBlogThis!Share to TwitterShare to FacebookShare to Pinterest
Labels: Common Core, education deform, elites, the Gospel of the Common Core