Bloomberg: Let The Peasants Bathe In Porcelain, I Shall Bathe In Copper With A Nickel Finish 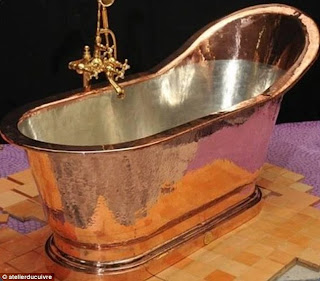 
New York's billionaire mayor Michael Bloomberg has splashed out on a bespoke hand-made copper bath at a cost of around $13,300.

Built to fit the mayor's exact specifications, French craftsmen have hand-molded the vast tub - the latest addition for his five-storey Manhattan townhouse which he is in the process of renovating.

The finished piece is expected to be shipped from the town of Villedieu-les-Poeles, in Normandy, northern France, this month.

Etienne Dulin, the owner of the 200-year-old Atelier du Cuivre (Copper Workshop), which was commissioned for the work, told AFP: 'He requested a nickel finish, to give a slightly glossier effect.'

He said that the advantages of a copper bath are that it takes the temperature of the water almost immediately, meaning the water cools down slower, and he said copper also kills bacteria.

Based on the man-hours required to build it, the news service estimated the cost of the bath at at least 10,000 euros ($13,300). Free-standing roll-top baths can be bought from around $500 or less.

Mr Dulin said: 'These days, those who have money are looking for ways to distinguish themselves from the crowd and we are virtually alone in the world in being able to deliver this kind of quality.'

When Bloomberg took office in 2001, he was worth $5 billion.

After 12 years in office, during which time there was two recessions and a stock market crash, Bloomberg is now worth $27 billion.

Just how did he increase his wealth five-fold while in office?

Just another example of things that make you go "Hmmmm...."

In any case, no wonder he can afford to bathe in a hand-made copper tub with a nickel-plated finish.

And this tub will go quite nicely with his solid gold toilet bowl and the bidet that pours forth champagne.

This man has more money than he knows what to do with.

On the other hand, better he spend it on garish crap like this than education reform.
Posted by reality-based educator at 1:35 PM

Email ThisBlogThis!Share to TwitterShare to FacebookShare to Pinterest
Labels: billionaires, Bloomberg, things that make you say "Hmmm....", too much money