The Daily News has a story about two kittens on the B/Q train line who wandered onto the tracks and had to be saved.

The subway lines were shut down in order to save the two male kittens.

GOP mayoral candidate and former MTA chairman Joe Lhota said the subways should not have been shut down in order to save the kittens:

Mayoral hopeful Joe Lhota would have let curiosity — or a racing subway — kill the kittens.

As frisky felines Arthur and August recuperated Friday from peril on an open-air stretch of the B and Q lines near Church Ave. in Brooklyn, the former MTA chairman on Friday said he would’ve saved straphangers from agitation before he saved the kittens from danger.

“It’s not up to the mayor, it’s a decision of the MTA, but Joe does not think it’s appropriate to shut down an entire train line for an extended period for this purpose,” said his spokeswoman, Jessica Proud.

Train service was suspended Thursday — twice — to rescue the kitties from their catastrophic choice of city housing near the electrified third rail.

A first effort to catch the cats, after transit workers discovered them around 11 a.m., failed despite a service shutdown of about two hours. Later, after the 8-week-old kittens became an Internet sensation, another rescue was mounted around rush hour, and a pair of cops and an MTA worker collared the cuddly duo in about 15 minutes.


The DN went with a horrific front cover for Lhota, with the headline DIE, KITTIES, DIE! scrawled across the front page with three accompanying photos - two of the cute cats, one of the not-cute-at-all Lhota. 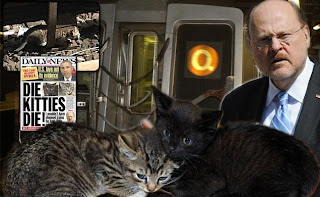 This is an unforced error by Lhota, although it's not one I expect will hurt him in the GOP primary race - his competition is simply too second rate for that to happen.

But this DIE, KITTIES, DIE! headline will follow him into the general election where a competent Democratic opponent will take that story and combine it with the story of Lhota challenging a 77 year old man to a fistfight last year at an MTA board meeting and the video tape of Lhota cursing at a reporter and pushing him when he was back in the Giuliani administration in the 90's in an ad called "LHOTA: JUST LIKE GIULIANI, ONLY CREEPIER or something along those lines.

Lhota's temperament will be an issue in the general election and, barring something awful happening (like in 2001), I do not think Lhota will be able to overcome that fatal flaw of his.

The fact is, Lhota's an ass and unlike Bloomberg, who can at least hide that part of his personality at times, Lhota seems unable or unwilling to hide it at all.

If Lhota faces de Blasio in a general, you can bet the strategically savvy de Blasio campaign will exploit Lhota's temperament.

Even Quinn would actually seem warm, cuddly and sympathetic against a jerk like Lhota.

Only Thompson would have a hard time exploiting Lhota's temperament in a general election matchup, although that's mostly because Thompson is an inept candidate running a campaign that can't shoot straight.

Thompson did luck out in one respect with this Lhota story.

It came on the same day as the Times A1 expose on Thompson's crookedness as comptroller and will take some of the steam out of that story.

As for Lhota, you can bet this will come back to haunt him.
Posted by reality-based educator at 9:27 AM