In a WNBC/Marist poll released on January 25, 2008, former New York Governor Eliot Spitzer had a 35% job approval rating and a 56% disapproval rating.

The January 2008 Marist poll was taken before the New York Times reported in March 2008 that Spitzer patronized an elite escort service.

Quite a fall for Andrew Cuomo.

As one commenter at the WSJ put it:


Must be quite disappointing for the ego driven governor. Never has a politician spent more on personal PR campaigns. Poor/Fair numbers have doubled from 30% to 60% in four years. Wonder who Mr. Bully will blame.


Cuomo can assuage his ego if he looks at the post-scandal Spitzer numbers from the WNBC/Marist poll released on March 11, 2008.

Spitzer had fallen to 30% job approval in that poll, 64% disapproval.

Think about that for a minute - Andrew Cuomo, who hasn't been named as a client of an escort service or embroiled in a political scandal like Troopergate beats a guy who had been by just seven points on approval and five points on disapproval.

Now its possible that yesterday's Marist poll numbers were influenced by the Skelos scandal - the poll was taken the day Skelos was arrested and the day after.

Nonetheless, as I pointed out yesterday, the trend in the Marist poll for Andrew Cuomo is quite clear: 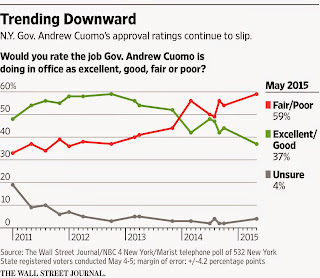 Cuomo has said aloud that he would like to run for a third term, but given the numbers he has right now and the trend over the past 4+ years, he would be no shoe-in for re-election.

Since the beginning of the year, we have seen both Assembly Speaker Silver and Senate Majority Leader Skelos arrested and stripped of power in their respective chambers.

Cuomo has his own ethics and corruption issues to deal with (here and here.)