Regents Evaluation Plan Looks To Be A Mess

From Politics on the Hudson comes these screenshots of some the preliminary recommendations from the NY State Board of Regents for Cuomo's teacher evaluation plan: 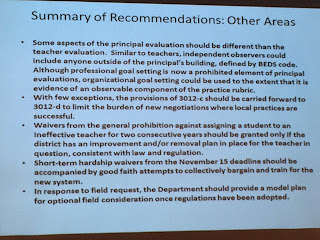 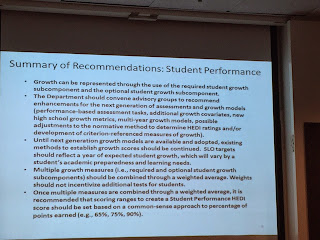 Rich Karlin of the Times-Union has more:

Responding to what they say are calls by parents and coming just over a week after a statewide meeting at which the current program was roundly criticized, the Board of Regents say they would like to reduce the time students spend preparing for and taking tests, although they were warned there will be tradeoffs if that happens.

The calls for less testing are coming from numerous quarters including teachers unions and parents who believe their kids are spending too much time and stressing out too much over the standardized tests they are given throughout the course of the school year. Legislators, responding to parents and union pressure, have also called for limits on the testing.

But quicker tests could mean creating a less complete picture of where a student is in his or her development. And it could mean proportionately more multiple choice (sometimes derided as ‘multiple guess’) questions. Tests could also be streamlined Wagner said, if they eliminated the upper end questions that identify top students, who fall in the ”highly proficient” category.

Board members said they understood this but they relayed complaints they hear from parents and some expressed their doubts about how reliable the tests actually are.

“I doubt the validity and reliability of some of these instruments,” said Regent Kathleen Cashin. Added another Regent, Betty Rosa: “I am not totally convinced we have the right standards.”

Another problem with the current tests is that they are built to test student knowledge and achievement but under the state’s new teacher evaluation plan they could help determine ratings for some teachers.


Unreliable tests based upon flawed standards, tests that were not developed to rate teachers but now will es used to do so, less time for testing but more emphasis on the test score and a fetishistic emphasis on "next-generation assessments" that current reality exposes to be nothing more than a pipedream (see PARCC and Smarter Balanced.)

Also, have been told that the outside observer is still in the mix (two observers - one in-house, one out-house!) and observations may be as little as ten minutes.

Will get back on that recommendation when I have more information on it.

If true, that's extraordinary - literally, a teacher could be evaluated on twenty minutes of classroom observation.

So much for that Educator4Excellence jive about needing a new teacher evaluation system so that teachers can be given frequent, actionable feedback.

Looking at this thing, the word cluster#$%^ comes to mind.

That may not be the worst thing in the world.

The worse this thing is, the sooner it falls apart and sees another iteration.

Also, the worse it is, the more Cuomo will be blamed for it, since he insisted on many of these provisions and the unrealistic timeline for development and implemetation.

Unfortunately it means a lot more test-centric education for students and yet another year of new, ridiculous mandates for educators.
Posted by reality-based educator at 1:35 PM